It is also the story of a book, a book called The Hitchhiker’s Guide to Killing Agile, not an Agile book, never published on Agile website, and until the terrible catastrophe occurred, never seen or heard of by any Agile team members.

It begins with a colour…

In this new leg of our journey to try to survive The Hitchhiker’s Guide to Killing Agile, I take the cue from a thought-provoking quote by Hendrik Esser which was the introductory topic of the last Agile Alliance Agile Coaching Network webinar —a monthly event, organized and kindly moderated by Ray Arell, whose goal is to get and provide help with the adoption of Agile and other related topics.

A few minutes through the meeting, the following screenshot was under discussion. 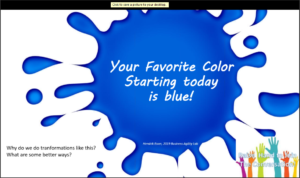 The thing is, even though it’s easy to agree that inflicting on someone their new favourite colour wouldn’t be a very good idea, it’s not that easy to figure out why some alleged Agile transformations are just that: impositions.

While some of the attendees started talking about how difficult is, sometimes, to avoid falling into the trap of a coerced Agile transformation, after a moment’s recollection, my mind surprised me by recovering an originally disappointing anecdote which could be currently used as a positive and helpful suggestion.

«I remember that, years ago, when the company I was working for decided to move from a traditional software development model to a more Agile approach, they apparently did it in a very half-hearted way.
At the beginning, just part of the team had the pleasure to start experimenting with the daily meeting, for example. By the way, it usually lasted about 45 minutes.

It has to be said that it was just kind of a candy they were allowed to take every day, since, at that time, the whole team was still following a traditional waterfall model.
The thing is, the team members who couldn’t enjoy their daily candy started feeling jealous.

What are they discussing during the meeting?
Why can’t we participate?
How the hell does it take that long?

Well, the latter was probably the question that the Software Area Manager kept asking himself all the time…

To be honest, I cannot recall exactly how much time this situation lasted.
Days? I wish so!
Several weeks? Probably.
A few months? Maybe.

However, I perfectly remember the feeling of frustration that such a state of affairs produced in the team members who were kept out.
Yes, I was one of them…

So, by the time the company decided to arrange a two-day Scrum training for the whole team, everybody was excited about trying something new.
Far from being an imposition, working in a different way felt rather like a gift for us.
And you know what?
Although it was difficult —of course, it was!—, I would say it worked somehow, since we made constant progress.

Now, I don’t know if all that happened fortuitously or if the manager cleverly planned the transition from jealousy and frustration to eagerness to participate in something new.
Anyway, be it either by chance or on purpose, I now realize that it can be definitely considered a tip to be kept at hand —and to be used carefully, of course— in case of an Agile transformation, especially when you expect some resistance to change from some people.
Make them envious of Agile: they’ll love it!»

This is what I said —or tried to say—, more or less, during the last Agile Alliance Agile Coaching Network event.
I later thought that it might be good to share with all of you this (hopefully useful) tip born out of frustration.
Because even something which was causing disappointment in the past can be viewed with a different perspective, and so converted into a useful pointer, after a while.

After all, (personal) continuous improvement starts in our mind(set), doesn’t it? 😉

P.S. I hope my coach Dov Tsal —yes, I’m receiving personal coaching, I find it very useful and I highly recommend it (voilà another tip for free!)— will be proud of me.
By the way, he’s great!

Should you have any doubts about Agile, please contact me: I will be glad to help you.

The Hitchhiker’s Guide to Killing Agile (9/?)